Thomas Francois Burgers who was elected president of the Zuid Afrikaansche Republiek in 1874.

President Burgers sent just over 10 kilograms of gold to J.J Pratt who was the Republiek’s consul General in London, to arrange for the “staatsponden” to be minted by R Heaton and sons of Birmingham. The coins were to have the same intrinsic value as the British Sovereigns.

R Heaton and sons only managed to mint 695 Burgerspnde as the dies broke and ,these 695 Burgers ponde were  delivered on the 25th July 1874.

The second shipment of  142 Burgersponde was only delivered in September after the dies were replaced.

It was only discovered in about 1944 that there was a difference in the coins. On the second batch of Burgersponde it was noted that after  the beard of  President  Burgers was coarser (four thick points, the front pair being shorter than the back. The beard is heavier and flatter in curvature) and the “8” in 1874 appears to be a double eight. The beard on the first batch of 695 Burgersponde shows one thick front point, then two longer and thinner points followed by three short points.

The front of the beard is wavy. The burr on the edge of the obverse of the coin shows a double ring.

It is because of this that the coins are referred to as the “fine beard” and “coarse beard” Burgerspond. There were therefore only 695 “Fine Beard” and a mere 142 “Coarse Beard” Burgers ponde minted.

Of the 695 “Fine Beard” Burgerponde which were minted in 1874 only 62 are known to have survived the centuries. It is known that PCGS have graded 8, NGC 41, while 13 have been graded by SANGS. 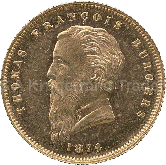 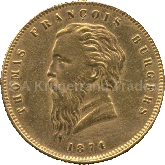 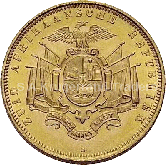