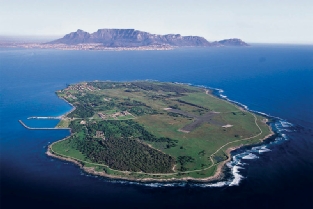 Robben Island was used at various times between the 17th and 20th century as a prison, hospital and a military base.

Robben island, which is, located just a short distance from Cape Town hosts more than 70 bird species, 23 species of mammals and spectacular vegetation.

The reverse of the gold Robben Island freedom medallion has the wording of statesman Nelson Mandela’s now famous words, which were spoken at his trial in Rivonia in 1963, as well as a symbolic key, which unlocked the door to the freedom of the people

“During my lifetime I have dedicated myself to this struggle of the African People. I have fought against white domination and I have fought against black domination. I have cherished the ideal of a free and democratic society in which all persons live together in harmony and with equal opportunities. It is an ideal, which I hope to live for and achieve. But if needs be, it is an ideal for which I am prepared to die.” - Nelson Mandela, during his trial in 1963.

The 2002 S.A world heritage sites Robben Island Launch set is wrapped in a leather pouch, together with a bronze certificate of authenticity and is cleverly presented in a wooden box which is very similar to the boxes in which the prisoners on Robben Island would store their most valuable possessions.