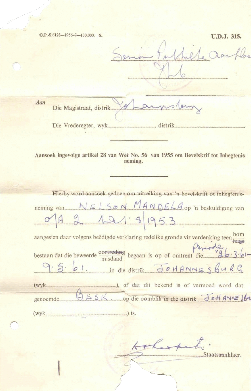 From 26 April to 28 April South Africa came to a halt as the entire nation flocked to the polling stations to determine their country’s future. On the Tuesday of 10 May 1994 millions of television viewers across the world watched as President Nelson R Mandela took his oath of office at the Union Buildings in Pretoria. The sun rose and set over a country in Africa where the impossible had become a reality. A former political prisoner had become president, while South Africans from opposing political camps together formed the Government of National Unity. The transition to a democratic South Africa is portrayed on this legal tender 1 oz pure gold coin which forms part of the world acclaimed Protea series. A portrait of former President Nelson R Mandela with the Union Buildings in the background is depicted together with the years

“1994-2004” and the denomination “R25”. The side view of Statesman Nelson R Mandela looking out of the barred window of his cell at Robben Island are depicted on the reverse of this coin. The obverse of the 2004, 10 Year Democracy Protea, portrays a King Protea in full bloom 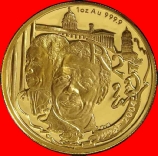 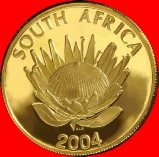 The reverse of the one rand silver Protea depicts the national symbols i.e the blue crane, the Springbok, the Protea and the Galjoen.

The tenth ounce Protea portrays the South African flag and the preamble to the constitution forming the design of the flag. All the coins portray the Protea on the obverse 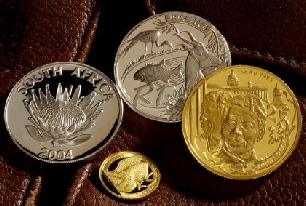 The limited edition 10 year democracy gold Protea  launch sets, more commonly known as The warrant of arrest sets or 10 year democracy prestige sets have a maximum mintage of 400. The coins are similar to the proof sets except that these coins portray a special mintmark, being the 10 years of freedom logo. These  sets are presented in a wooden case with a copy of the original warrant of arrest for

Nelson Mandela. The tenth ounce also has a mintmark, ten years of freedom. 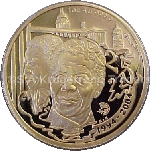