After the first democratic elections inSouth Africa, Nelson Rolihlahla Mandela was inaugurated as the President of South Africa on the10th of May 1994,

(now Freedom Day), at the Union Buildings in Pretoria. In order to commemorate this momentous occasion 1742, one oz, 24 carat, gold coins were struck by the South African Mint. This coin is known as the

The obverse of this coin depicts the Union Buildings and the reverse,

The official inauguration medallion was commissioned by First National Bank and minted by the South African Mint in 1994 and depicts the bust of Nelson Mandela and the inscription "Nelson R Mandela" on the obverse, while the reverse portrays an image of The Union Buildings. The S.A Mint were commissioned to mint a maximum of 4999 X One oz and 50 X five ounce medallions in 24 carat gold. No records were kept on the mintages of these medallions, but it is thought that no more than 2000 were minted

This medallion is spoken of as the ”Inauguration Mandela” 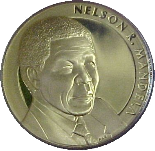