The third animal to be featured in the Natura,

Giants of Africa theme is the mighty Eland, the

largest of the Antelope. The  adult male Eland can

stand at around 1.6 metres tall  at the shoulde, and

The Eland  is the the largest of the antelope species, and

are mainly herbivorous, their diet comprising primarily of

grasses and leaves.The common Eland form herds of up

to 500 animals, but are not territorial, and prefer habitats

with a wide variety of flowering plants such as savannah, woodlands, and open and grasslands. The male and female Eland have spiral horns 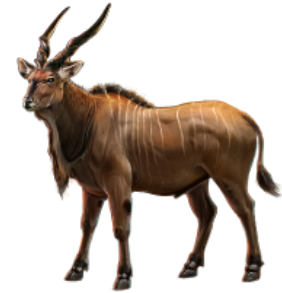 The Eland is depicted on 2007 Natura gold coin. The common obverse of the 2007 Natura Eland depicts a ¾ side view of an Eland, the mintage year being 2007 and the wording South Africa.

The reverse of the 1 ounce proof Natura of which there is a total mintage of 1,728 coins depict an Eland grazing, with the denomination being R100 and the wording “Natura”. Images of bushman rock paintings which so often portray the Eland are also depicted on the coin.

The reverse of the ½ ounce 24 carat gold Natura Eland, depict 3 Eland running with the incription “Natura” and the denomination of the half ounce Natura being R50. 1457 Natura Eland half ounce coins were minted.